Before I begin, allow me to reiterate that this is a food tasting invitation by JPassport.

Ginza Anzu was formerly located in Wisma Atria, but has recently joined the hype in moving to Great World City, which is fast replacing Liang Court in becoming the next Japanese town. No prize guessing, the name itself probably already suggested where Ginza Anzu is hailing from, in fact, their outlet in Ginza’s Mitsukoshi 11F regularly attracts a queue outside, and now also have oversea restaurants in Taiwan, Korea, Malaysia, and of course, Singapore. What makes Ginza Anzu fascinating is that, they aren’t just a restaurant chain, they have their own farms as well as contracted farms, and their businesses encompass livestock, vegetables, food processing, and food machinery too (Hence, some claim they are from Kyushu, which is also not wrong, considering most of their enterprises are actually originated there). This way, they epitomise a farm-to-table concept, and managed to achieve good control over consistency and quality on the ingredients they use. In addition, they proudly proclaim that most of the ingredients used in Ginza Anzu are imported from Japan. I’m not sure about their restaurants elsewhere, but at least for their Singapore outlet, it’s worth noting that they are also importing premium pork from America.

For this food tasting session, we were allowed to select one from the Ginjo Pork (吟釀豚) Katsu set, and the other one has to be Hot Pot Pork Loin Katsu Set. Any sake lovers here? I know what you are thinking… Nope, I have asked, but the Ginjo Pork has nothing to do with sake. Over here, it’s simply their term referring to selected premium pork that has undergone an unique ageing process.

Soon as we placed our order, we were promptly served vegetable salad and radish pickles. My dining partner thoroughly enjoyed the pickles while I love their salad, along with the creamy shiso dressing. The salad is free-flow, but good thing we were only given one bowl to share though, as our upcoming meals kept us so full that we would have struggled to finish two sharing. In any case, our 2-seater table was too small for two set meals, there were hardly any space for the salad and pickles, which ended up, we needed to join another table.

The Hot Pot Pork Loin Katsu Set came really fast, perhaps aiding by the fact that we were visiting during off-peak hours on weekend. It comprises breaded pork loin cooked in savory dashi broth dressed in egg swirls, pickles, rice (plain or brown), soup (miso or pork belly). If not for the fact that we weren’t allowed to order both Ginjo Pork Katsu sets, I probably won’t have ordered this, I anticipated the broth to rinse away the taste of the tonkatsu entirely, but it didn’t. It still retains the flavour to a certain level, and not excessively soaky. I genuinely believe that’s the best tonkatsu that goes with broth! On the other hand, the aroma from the egg complement the meat real well, and the pork remains chewy throughout. We were allowed to select between Miso soup and Pork Belly Soup for our meals, in fact the latter is also Miso soup but the added pork belly sure sweetened the broth. As for the rice, they are using Koshihikari rice from Niigata prefecture, possibly the land that produces the best rice on earth. Ginza Anzu claims that they select rice that was grown where natural water flows, and in Niigata, which is a heavily snowing region, that is as good to say melted snow water fertilises the paddy field. The best part is, rice is served free-flow for the set menu. 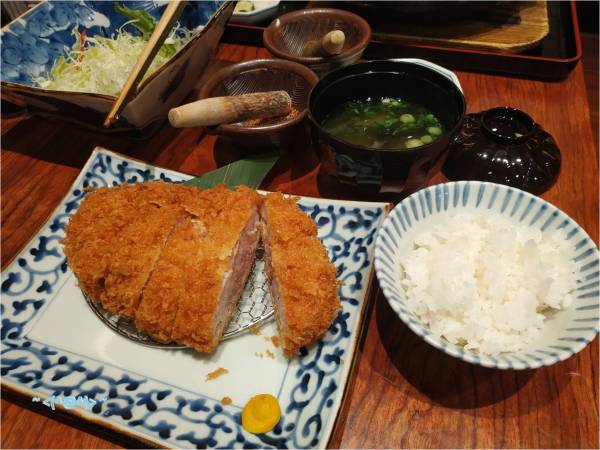 This is definitely the highlight from Ginza Anzu. Thick, juicy pork loin is fried to a golden crisp with the bread crust, and there are two different sauces to go along with, one sweet, and the other sour. Diners are given tiny bowl of sesame, which they can grind, and add respective sauce to go along with the tonkatsu. There’s also mustard to go with, but alternatively, if you are a bit more adventurous, you may wanna try it with the salad dressing too.

I find that the meat texture is rather firm, but with some fat portion to balance it. What impressed me was not so much on the meat, but the soft breaded crust. Not only it wasn’t oily, in fact it barely stick to the meat, but it has an interesting mixture of fluffiness and crispiness, quite indifferent from the common tonkatsu I have ever tried.

Other than the tasting menu, we had also ordered a side and a dessert to share. 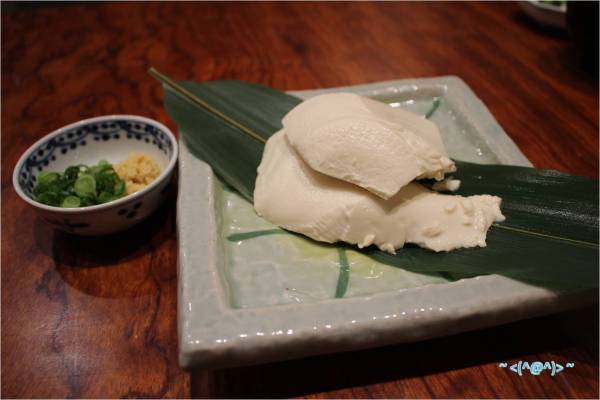 I won’t call this Tofu cheap, well actually it’s probably due to the labour cost in making them, more so if they import ingredients from Japan. Like many Japanese tofu, Ginza Anzu’s tofu has a coarse texture, which when you apply the condiments, such as the accompanied ginger paste and spring onion, or even the Yuzu soy sauce, it makes them easier to retain the flavour. Solely for Japanese tofu fans, which we happen to be! 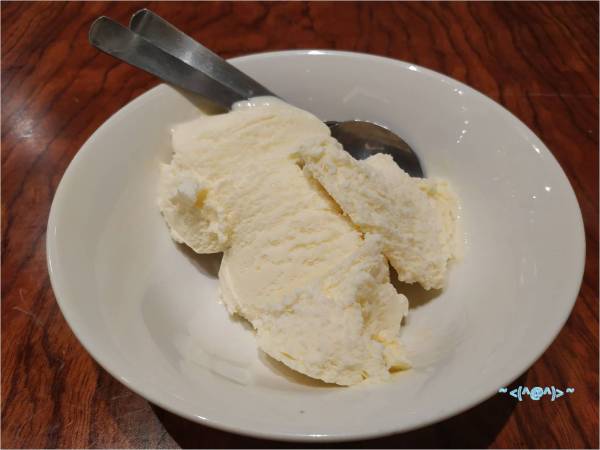 Last but not least, their premium Vanilla Ice Cream has a rich vanilla aroma, and since my dining partner and I are both Japanese sweet potatoes lovers (seriously, I’m one who would purchase bags of sweet potatoes at rock bottom prices whenever I visit Japan, not from Donki!), and her favourite ice cream flavour happens to be vanilla too, we thoroughly enjoy this heavenly combination! In fact, this is one I’d like to order on its own even if I’m not having meals in their restaurant.

Towards the end of this review, I strongly recommend trying their Service Lunch ($15++) if you find them available. It’s limited to 20 sets per day between 11am to 2pm. Personally, I have not tried it, but the price is attractive given the presentation and ingredients shown, and this is what I’d love to try for my next visit.

Once again, I would like to express my thanks to JPassport and Ginza Anzu for the food tasting invitation. Although I’m not obliged to stress, but it pays to become a JPassport member especially if you love Japanese cuisines. As of now, Ginza Anzu is offering White Coffee Pudding to JPassport member who visit them for the first time and order at least one main course. At the time of my visit, their White Coffee Pudding was already sold out, so go early to avoid disappointment.