This lazy egg, a Sanrio product, was a character designed for their Food Character Election back in late 2013. Surprisingly, it didn’t ended up being first, which was in fact, won by Kirimi-chan. Who is Kirimi-chan you asking? Good question, it’s still relatively unknown outside Japan, maybe within Japan too. But honestly, I don’t find Kirimi-chan charming, how it won really puzzled me. Anyway, Gudetama’s very passive attributes earned more fans even than many of Sanrio’s all time favourite characters, its character really calls out the internal desire in us to ‘nua’ (a Hokkien word for idling) amidst our busy endeavour.

Come 30 Nov, it’s going to be Gudetama Café’s first year anniversary. Although the fever has somewhat subsided, but given their prime location in Suntec City, you may still need to queue for a while during weekend dining hours, especially if you want one of their four specially decorated tables by the wall. I booked a table for a weekend lunch, and a couple queuing just in front of us wanted our table, however upon learning it was reserved, they disgruntledly walked away. Hence, it’s advisable to book advance if you are coming during peak hours. 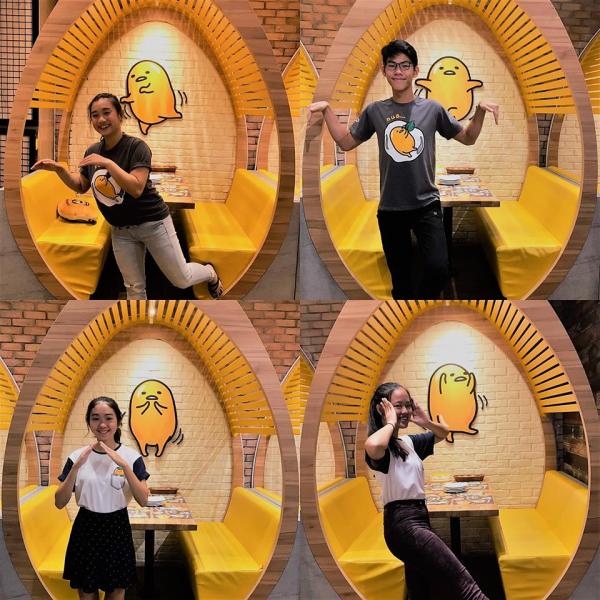 We were allocated table 1, so I guess that probably means we were one of few who made reservation for that time slot. The egg-shaped semi enclosure has a large Gudetama placard hung by the wall (each enclosure having a different Gudetama), with two Gudetama cushions on the seat, and a wet tissue box in Gudetama design.

Their menu in my opinion, doesn’t offer as much as conventional restaurant, guess that’s why they are just a cafe, not entirely a restaurant, and let’s not forget the main objective is to immerse in that Gudetama experience anyway. Each and every item on their menu certainly feature our beloved mascot with its passive but adoring look. 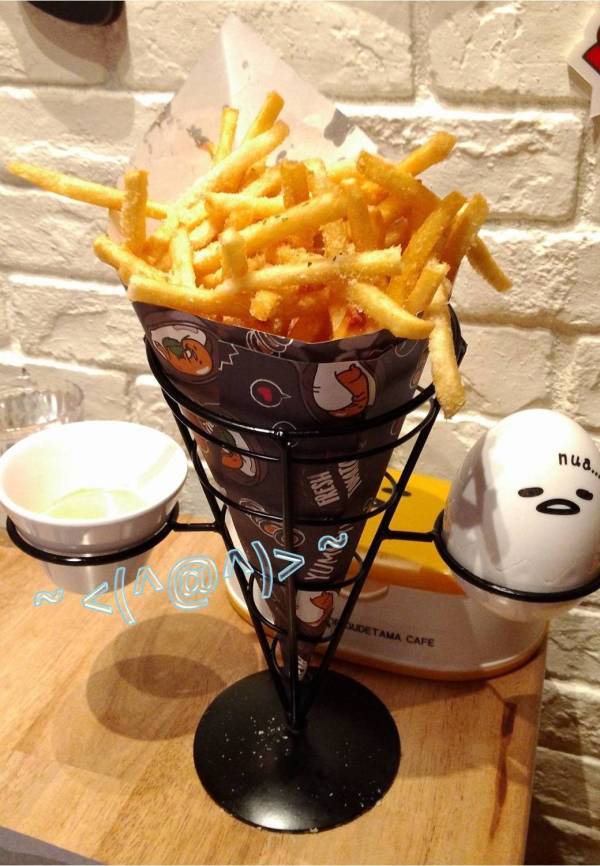 To start with, we had a fries to share around. The fries came wrapped in a cone-shape container, although its appearance is far from appealing given the price tag, the taste was great. The Parmesan cheese sprinkled on the fries certainly raise the flavour up a few notches, particularly with the accompanied Aioli and Sriracha sauce. This was the first time I’m hearing these sauces, but I won’t say the taste was remarkable. We asked for chilli sauce too, and as a chilli lover, I was more impressed by the chilli sauce instead.

I had their Big “NUA” Breakfast, featuring two eye-catching Gudetama sunny side on top of a piece of buttery brioche toast, baked beans in a Gudetama bowl, sauteed mushrooms, spicy pork bratwurst, bacons, and salad. I’ll be very honest, the taste is nothing outstanding, above average at best, the spotlight of course, lies on the cute Gudetama features.

Dad had the Gudetama Lobster Onsen, basically a soup with a Gudetama in it, reminiscing soaking in an onsen. Dad finished the lobster bisque inside, but struggled to finish the bread bowl. I guess he still like the soup, but he wasn’t quite enjoying the bread.

Mum ordered their Eggcited Cajun Chicken with Waffles. This is a blend of dessert with main course, and came with buttermilk waffle and grilled Cajun chicken, as well as a Gudetama, with whipped cream inside the egg shell, salad, and maple syrup. I think as a consensus, we generally agreed this was the better one, in terms of taste, that is. The chicken still retained the tenderness, and their waffle was a delight in comparison with my toast and dad’s bread bowl. Seriously, I would have ordered this if mum wasn’t a step quicker than me.

Gudetama Café Singapore has unique items on their menu in contrast to their other franchise elsewhere (right now, I only know of Osaka and Taipei), in part because it’s a partnership between local restaurants The Soup Spoon and Joe & Dough after all. So, some of us may find the taste a tad familiar, but almost certainly not the look, in part, kudos to Little Miss Bento for the creative styling. However, if you think the cafe’s food are merely about having Gudetama theme, then you can be very wrong. What I find fascinating is that, some food here just ain’t what you think they are. Like, an egg may not be an egg, or noodle may not be noodle. We didn’t order those specialities during this visit, because I was skeptical about trying them in my first visit, but I will be more adventurous in my future visit.