It seems like I’m pretty addicted to Eat at Seven of late. Enbu is yet another of Eat at Seven’s element, but probably the most neglected one because of its secluded spot. In fact, it was the very first Eat at Seven restaurant when it opened although its location on roof top almost gives the impression it doesn’t belong to them. Enbu is an izakaya styled restaurant presumably partially related to Tomo Izakaya in Clarke Quay. As such, other than the food, they also carry a wide range of Japanese sake.

What makes Enbu special is their use of charcoal for grilling, or more impressively, straw-grill (warayaki). They claim to be the first (and probably only) restaurant in Singapore doing so. 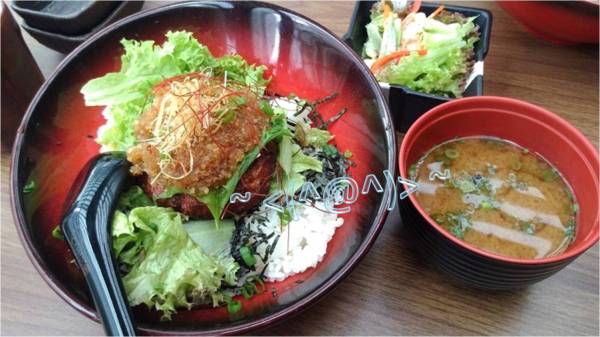 I must have left my spectacle at home when I read their menu but missing out on the straw-grilled items, anyway, I ordered Enbu Grill Original Chicken Pattie with Ponzu Sauce. The meal came with refillable tea, miso soup, a salad (if I remember correctly, I believe it’s avocado salad), and the main course. In my opinion, the Ponzu sauce definitely makes the meal more appetising. In fact, I have to credit them for the seamless effort in their presentation, which truly makes the main course such a fine piece of art! 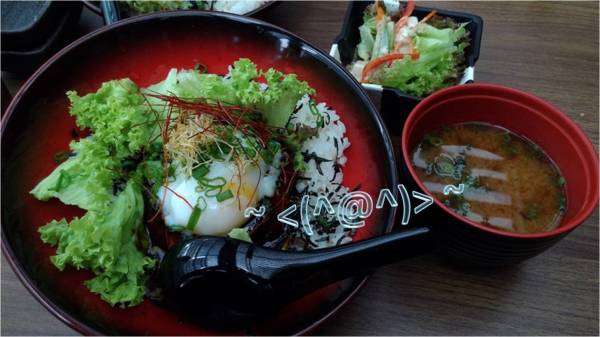 Their Enbu Grilled Original Chicken Pattie with Half Boiled Egg is just as impressive. Japanese love to stir egg yolk onto their rice, which gives a sweeter taste overall.

The above items are only available during lunch hours, but come during the night, I assure you the restaurant ambiance will be simply exceptional!

During my visit, JCB card holders are entitled to 1-for-1 promotion (until Jun 2017) on selected items. It’s actually quite worth it!

Well, now that I learned Enbu is actually well-known for their straw-grill cuisines, what I intend to order for my return visit is pretty straightforward, one of the straw-grilled items on their menu!

I ordered Straw frame Grilled chicken with Teriyaki Sauce. I must confess I have never tasted anything straw-grilled before, as such, I have totally zero idea how it would taste like, but full of anticipation. To be honest, I found straw-grill pretty much a gimmick, it’s quite unlike charcoal-grill where one can virtually smell the difference, though I do find the chicken delicious. And as before, Enbu’s presentation is awesome! In fact, take away the somewhat distracting term ‘straw-grill’, and this meal excel on its own right, with Teriyaki sauce of adequate sweetness that doesn’t take away any spotlight from the chicken. 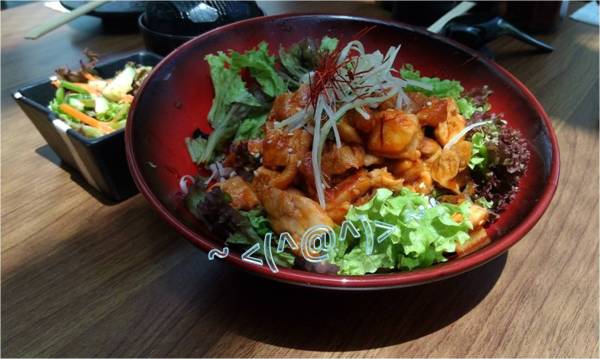 On appearance, there seems to be no significant difference between this order and that I elaborated previously. It was suppose to be spicy, somehow I don’t find it so. Again, I couldn’t tell of any straw-grill aroma.

This is basically Kaisen-don (seafood rice), and the seafood sashimi are fresh and flavourful, and the Yuzu Pepper Sauce is delightful!

Singapore has its fair amount of great Nasi Lemak, and Hi Leskmi definitely deserves to be among the best. Exactly why they have such strange name (which doesn’t synchronise with their Mandarin name anyway) is pretty puzzling, but hidden inside a residential area in Whampoa, Hi Leskmi is actually well known among food hunters in Singapore. Somehow, I suspect, its location (particularly the lack of MRT connection) probably put off more patrons to their stall. However, come lunch time you will see a snaking queue forming outside, though waiting time is reasonably fast.

As can be seen from their signboard, they typically offer 3 types of set meal for an affordable price of $3.00, but you can order your own a-la-carte selection possibly for a little bit more. Hi Leskmi’s signature lies in their green-colour rice, presumably cooked with pandan leaves and of course, coconut milk. The rice is very fluffy and flavourful enough to make you return for more.

In addition, it ain’t just their rice that is good, they did well with their egg and peanuts too! Their egg was still runny and the peanuts demonstrate crispy freshness, while the chili is a great blend of sweet and spiciness. Still, I must reiterate, I feel it’s the rice that has stolen the show. 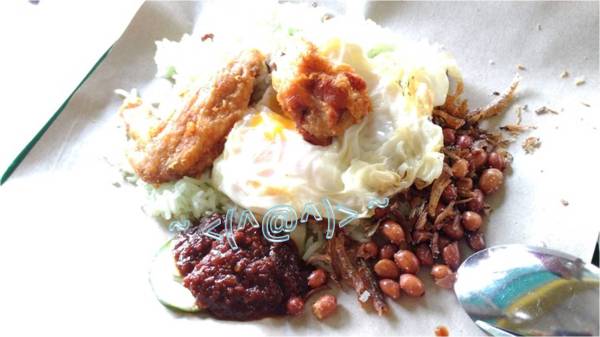 My friend ordered set A, the difference being the choice of chicken wing or fish cake. Set C comes with Otak. 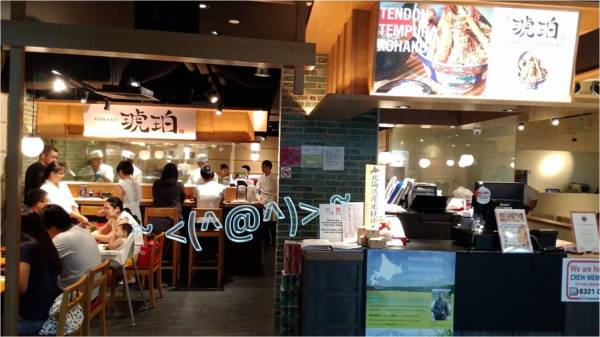 I have walked passed Tempura Kohaku more than a dozen time, and couldn’t understand the commotion for the super long queue outside. But one fine weekend, when I was trying to impress someone special, I decided to bring them queue for Tempura Kohaku. This is one outlet that I had never failed to see long queue outside no matter what hour I drop by, and on this occasion, we queued for a good half an hour. If you think after queuing, your food will be served shortly afterwards, you are utterly wrong! We waited for ANOTHER half an hour before our food were served. This is strictly not for the hungry tummies.

I suppose I don’t have to (re)introduce Eat at Seven any further (read my post on Tokyo Sundubu for further details), and Tempura Kohaku is another tenant here, certainly the most popular one without a doubt. And before I go on with the main course, I absolutely have to mention their free pickles. 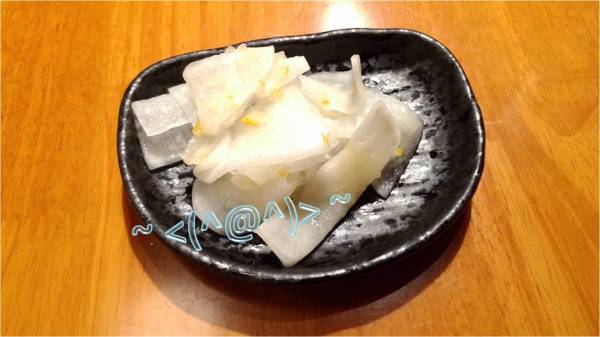 From first glance, it’s just radish. But notice the yellowish flakes? It’s not just ginger, it’s spiced up with Yuzu pulps and overall, it’s quite appetising!

Tempura Kohaku basically offers two different types of tendon, Kohaku Tendon and Vegetables Tendon, priced at $15++ and $14++ respectively, and further segregated into spicy flavour and non-spicy flavour. They generally use Hokkaido’s Nanatsuboshi rice, but diners can also choose 16 Multi Grains + Nanatsuboshi rice at no extra charge. It is claimed that all 16 grains and rice are produced in Japan. I almost cannot taste the difference but it certainly provides more healthy benefits. Kohaku’s forte very much lies in their sauce, it’s sweet and flavourful. Of course, their tempura are quite generous and yummy too! I was amazed by their tempura variety, which include long bean, pumpkin, mushroom, squid, chicken, crab stick, baby corn, and two shrimps. When it was served, they placed a small plate on my donburi, I seriously don’t know what’s it for, but I used it as a spare plate to place my tempura, which, as you can see, almost shielded the entire bowl of rice from daylight. I have to say, this is the best tendon I ever tried! It’s not just me, the old folks love it too, and we all came to the consensus the long wait was worthwhile. 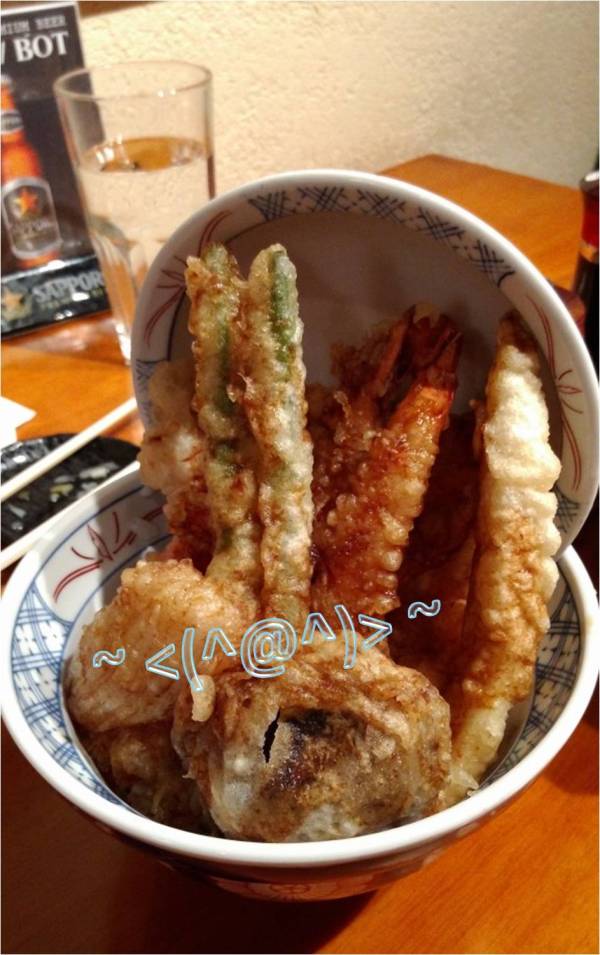 This is the normal Koharu Tendon (non-spicy), but I think the difference lies in the spicy sauce spread on the rice, not on the tempura. 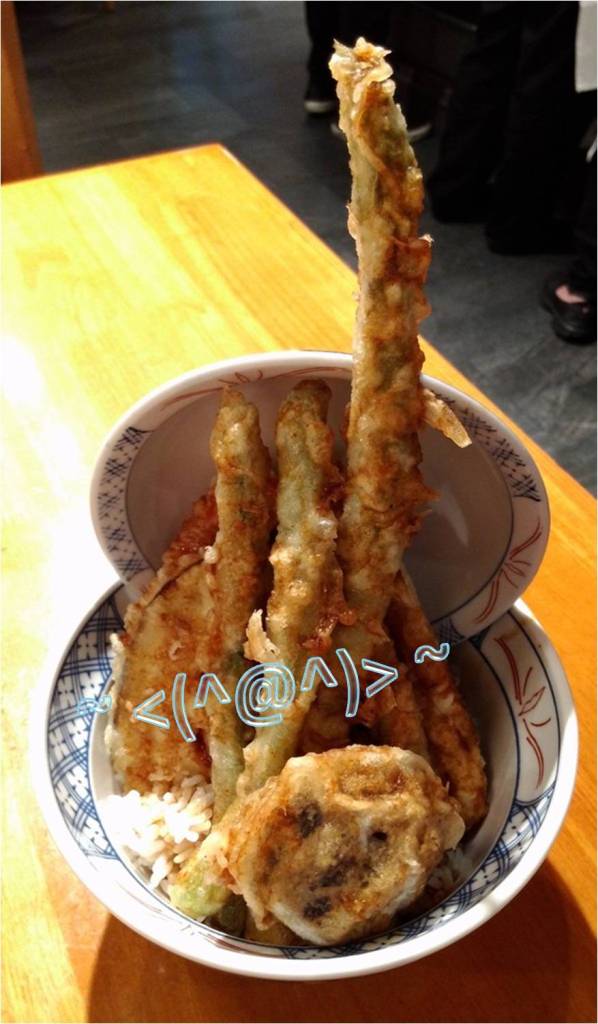 The meatless Vegetable Tendon… I’m wondering what’s that long long vegetable though. Mum actually loves this tendon so much she wants me to take her to a tempura restaurant when we visit Japan. But seriously, I can’t be certain I can find anything better, unless we go out of the way and wasted precious time queuing for it.

In addition, Tempura Kohaku offers set meal too, which cost an additional $4.50++ for an added bowl of Udon.