I have to confess I was a bit swayed by negative reviews online before going Eighteen Chefs, notably the Roy Chuang saga at their The Cathay franchise last year, though surprisingly, Eighteen Chefs popularity seemed to surge immediately after the fracas, if only for a while. I came across other common feedback too, such as ridiculously long serving time, ignorant waiters/waitresses, mediocre food etc, amidst the occasional positive ones. And I can’t say I was not influenced in a way when I stepped into their outlet in Eastpoint Mall on a Saturday noon.

But are things all really that bad?

Before I start, a little history about Eighteen Chefs: Allow me to derive the story from BBC. This is a restaurant chain founded by ex-convict Benny Se Teo, who named it Eighteen after the gang his late father belonged to, in the hope that it would help inspire delinquents to turn over a new leaf. Benny is not shy about his past, and has previously worked in Jamie Oliver’s London restaurant Fifteen, where he learned the trade of running a kitchen which is also a social enterprise at the same time, and subsequently brought over the concept to Singapore. However, not all his staffs are ex-convicts, only about 50% of them now, because he encountered problems while having 90% of his staffs being ex-convicts in the early days of his entrepreneurship.

Right, I have spent a little long than usual because I found it meaningful to elaborate. Let’s quickly get down to the point!

We were promptly brought to our table in a half-filled restaurant during an early Saturday noon. The waitress passed us the menu and an order slip, which we were suppose to fill in our order and present it to the cashier, payment on the spot, and the waitress will serve us the food when they are ready. You can help yourself to plain water and sauces at a dedicated corner. Not much service rendered there, but then again, we are not paying any service charge. The prices indicated in their menu is already inclusive of GST.

By the time we got back to our table, the restaurant was already full. A little more than 5 minutes later, our food was served.

To be frank, the rice is too little for me, however, the prawns and green are quite generous, even the sunny side up was great, nowhere near the burned bottom as encountered by some online reviewers. The prawns are exceptionally fresh, and the sambal truly packs a punch, it has enough fragrance and spiciness. 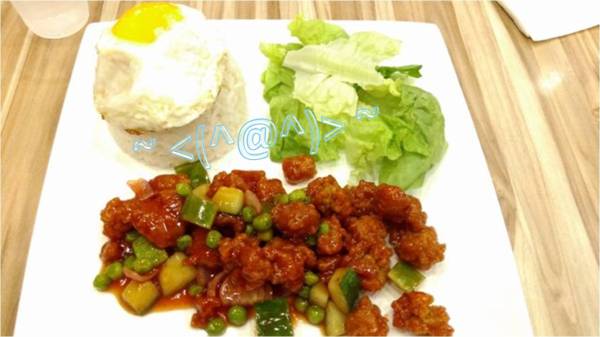 Cucumber, green peas, and onion slices really brings out the favour of the tender chicken ball.

Overall, I would have rated their food as above average, anything better, I probably would have to find them in a high class restaurant.

I’m glad my experience is very different from most of those reviews I came across on The Cathay, Cineleisure, and Ang Mo Kio branches. But seriously, Eighteen Chefs has 9 franchises to date, and the amount of diners I saw is a sign of justification things aren’t as bad as I first thought.